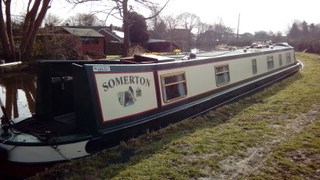 Semi-trad layout with rear steps leading to galley, with new oven and hob (2019), fridge, microwave and workspace. The inverter is below the steps and the fuse board fixed to the bulkhead on the right. A solid fuel stove is located here. An open plan dinette with extending table with L-shaped seating which converts to small double with under seat storage. Side hatch with removable window, shelving below, reading lights, power point for both 12v and 240v, and a TV aerial point. There are 3 radiators fitted here.

Door through to corridor can be closed to separate the dinette/galley from the rest of the boat. Next is the rear bathroom with drop through toilet, basin with cupboard below, corner bath with shower over. There is a storage cupboard above the toilet. In addition there is a switch to operate the bath water pump.

Adjacent to the bathroom is the Alde Gas boiler and a full length wardrobe. The door to the wardrobe is used to separate the fixed bed cabin from the corridor and bathroom.

The fixed double extends to king size and has two storage lockers and 2 below bed drawers. There are 2 reading lights plus a 240v power point.

The forward saloon has a full length wardrobe whose door separates the centre cabin from the saloon. There is a 2nd drop through toilet with hand basin and glazed shelf.

The forward saloon consists of 2 single bunks which convert to a large double with ample storage beneath the single bunks. There is a flat screen TV with TV aerial point plus 12v and 240v sockets.  There are French doors leading to the cratch area which has 3 storage lockers, a glazed front to the cratch and a cratch cover.

All lighting is LED. The water tank is below the bow deck. 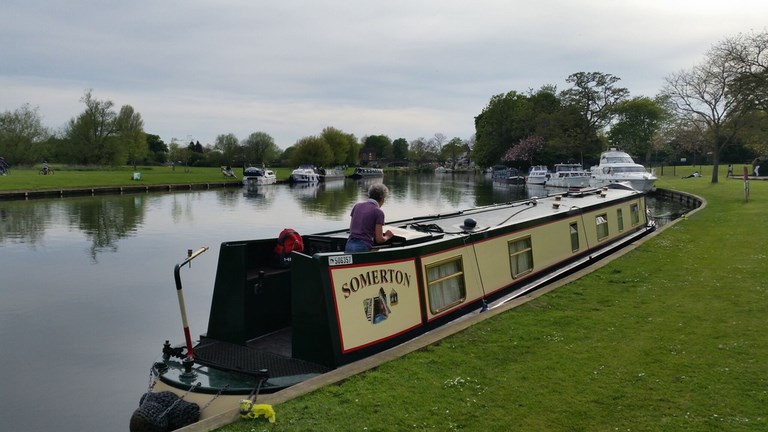 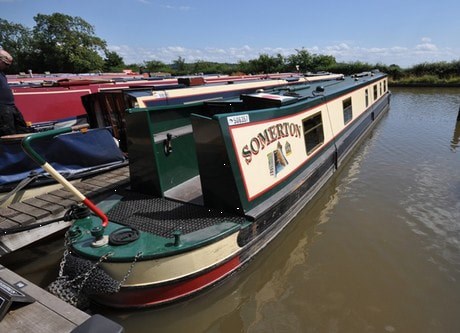 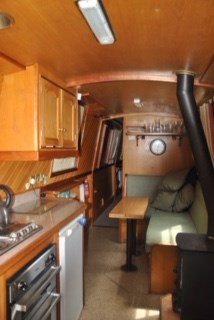 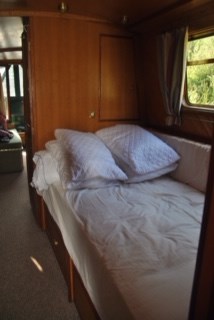 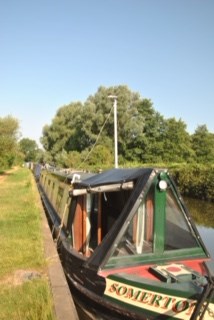 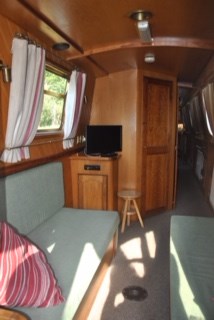 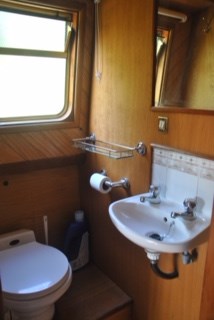 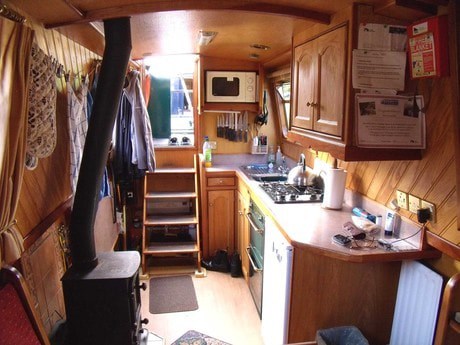 We have been owners on Somerton for the past three years and are now saving to buy our own narrowboat.

Somerton has a significant fund behind her, meaning that major works such as engine replacement or repaint will be covered by the fund without additional outlay by owners.

Two weeks in January are used to black the hull and gunwhales, and carry out the maintanance and renewals programme that the owners have decided on during the November AGM.
We have been impressed with Somerton, particularly the:

1) Easy access from the aft deck down into the galley, especially in poor weather, with wet/muddy clothing stored inside rear door;

2) The ability to sleep guests in the forward cabin, while parents and others can stay up later in the aft cabin and not disturb the others;

3) The ability to sit in the cratch during wet weather and keep dry while being able to see out.

The syndicate is well-managed and a meeting is held each November giving everyone an opportunity to discuss the ongoing management of the boat. There is a detailed syndicate agreement which provides the operational procedures. There is Googlegroup which provides a discussion area and Dropbox for storing all documentation.

Each winter the interior and exterior are updated as necessary. During the past 3/4 years the upholstery and curtains have been replaced.

The exterior paintwork has been maintained through repainting as required rather than a whole boat approach.

The interior woodwork is in good condition.

Each winter the hull is blacked, the gunnels repainted and a winter service to the engine. Routinely the engine is serviced throughout the year on a handover day.

Since owning a share the boat has moved mooring every 2 years or so enabling us to cruise a variety of waterways and see much of the country that we would otherwise have missed.
We have enjoyed our time on Somerton, and will miss her!