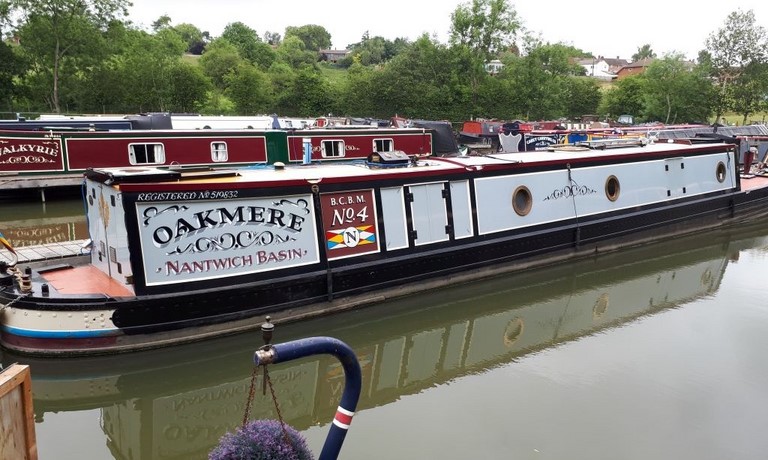 Oakmere is a replica tug with Josher style bow and a traditional stern. The metalwork by Tyler Wilson includes recessed panels and other traditional style detailing. Exterior paintwork includes a large area of traditional scumble on the roof.

Entering from the stern there is a storage cupboard on either side, one of which also houses the bow thruster controls, engine controls and the Webasto central heating system. The traditional style steps contain a coal box. There is storage under the bottom step for windlasses etc. There are traditional speed wheel controls which are easily accessible to the steerer over the steps.

The rear day cabin (which is a modern take on a traditional boatman's cabin) has a small Faversham solid fuel stove with kindling drawer under. There is a small seating area with storage under and a large cupboard housing the guest double bed with storage above. On the other side there is a narrow seating area. There is a window into the engine room with privacy blind for night time.

The engine room has a Beta Marine JD3 engine with traditional controls. There are two sets of side doors. There is a full height cupboard for electrical, inverter and remote engine controls and this also houses a small washing machine. There is a further small storage cupboard and a bespoke shelf for the chimneys. The engine room has a bespoke copper radiator and copper piping on the engine. A drying rail is located above the engine allowing for quick drying of wet clothing in the residual heat generated by the engine.

Moving forward the "cross over" bathroom has a large 900mm quadrant shower, black granite worktop with a white porcelain bowl type washbasin with a cupboard and shelves under and a mirror above. The toilet is a macerating pump out type toilet and there is a chrome heated towel rail over. Karndene flooring.

The galley has black granite work tops with a 12 volt fridge with freezer compartment, bespoke cupboards and drawers under. There is a gas hob and gas oven/grill. There are bespoke high level "over port hole" cupboards over the sink. There is a microwave oven and toaster. On the port side there is a set of side doors and a Houdini hatch in the ceiling. Kanrndene flooring and central heating radiator.

The main saloon has a solid fuel stove, two Wilsons "captain" type cream leather reclining chairs with footstools, Side cabinet with cupboards and shelving and housing TV with DVD, radio with CD to a Bose 2.1 sound system. Sliding out from under the tug deck is a cantilevered dining table (to seat 5). Concealed cupboards at the sides house four dining chairs. The fifth seat is formed by the multi use "piano style" front steps which convert to use as a seat or a small coffee table.

Also sliding out from under the tug deck is a full double berth (4ft 6ins wide and 6ft 6ins in length. For night use there are two small bedside tables which fold away during the day and these have individual reading lights. There are two clothes storage cupboards above at the sides of the front doors. The saloon has another set of side doors, three portholes, central heating radiator and Karndene flooring.

Double doors at the front (with sliding hatch above) lead onto the large tug deck. There is a large front storage locker and a further bow locker houses the gas bottles. A traditional copper tunnel light (removable and stored on a bespoke fitting in the engine room) sits on a pillar between these lockers. 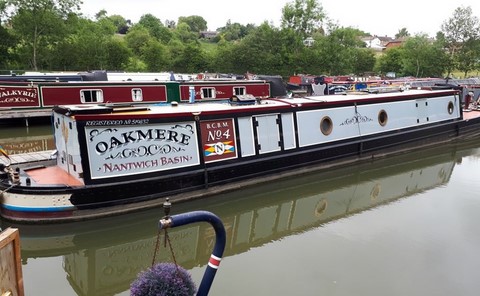 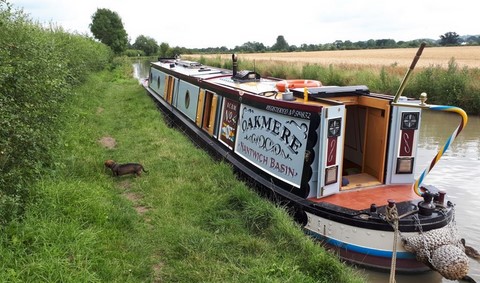 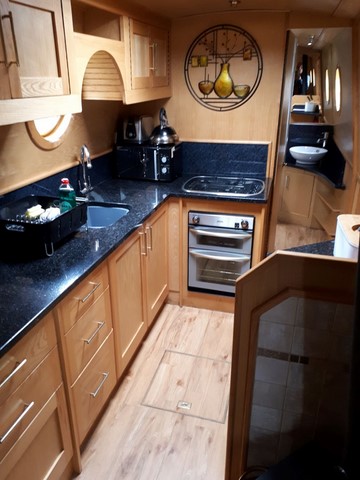 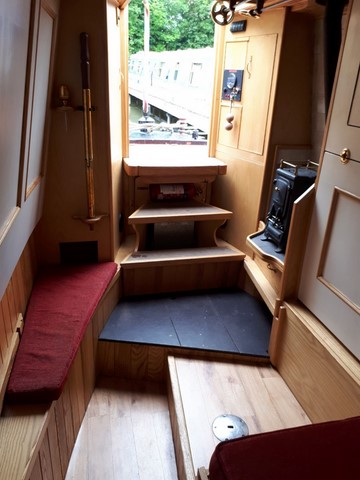 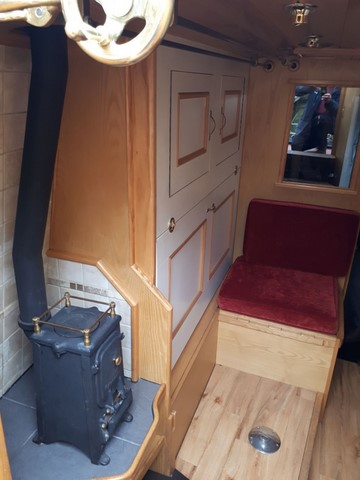 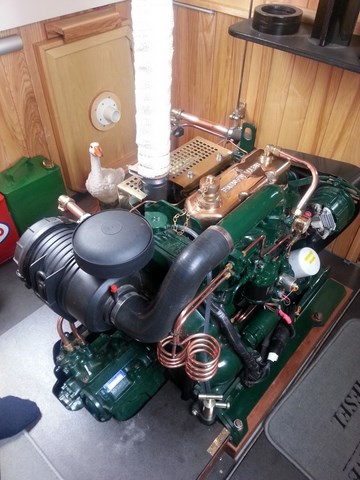 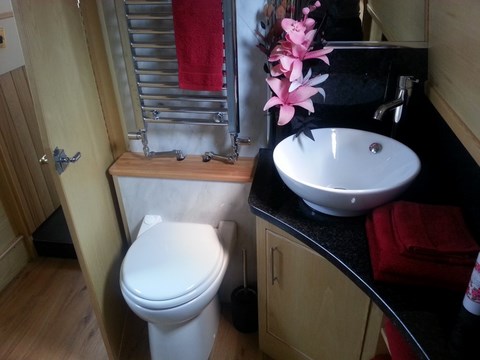 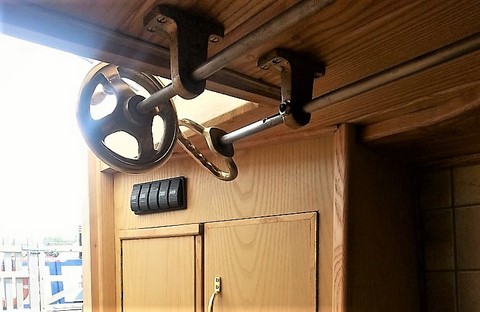 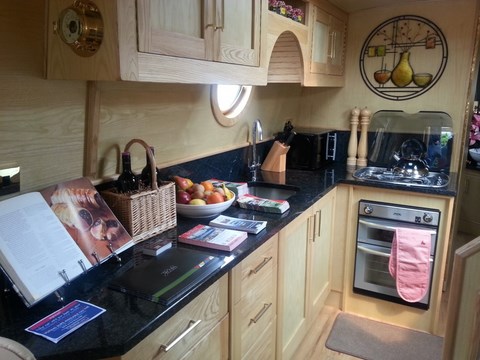 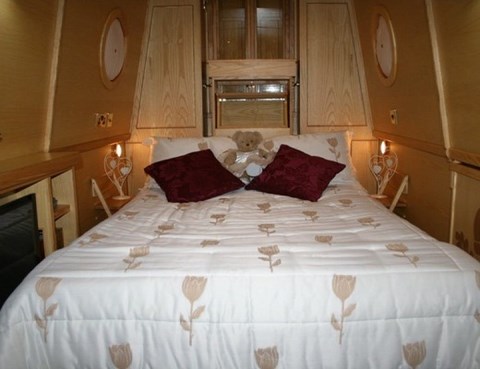 Oakmere is a most unusual boat to find in a shared ownership scheme - the dedicated engine room, boatman's cabin and tug deck make for a very attractive and traditional style vessel which is always much admired on the system.

The tug deck provides both a pleasant space for sitting in the evening while beneath lies one of the great benefits of the design - a retractable full width bed which means neither occupant is in close proximity to the side of the boat.

The holiday weeks are drawn by lot with one week allocation per quarter.  Spare weeks have also been a regular occurrence throughout our ownership such that it is quite conceivable that actual usage extends in excess of the standard four week allocation.