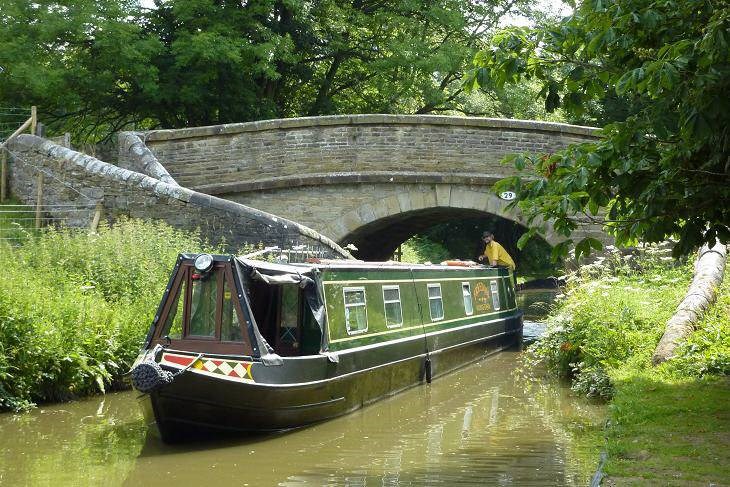 Freedom is a comfortable 60 foot steel narrow boat with a traditional stern. She is fitted with:

Wardrobe with hanging rails and shelves.

Bathroom with wash basin, shower bath and toilet (pump out).

Sitting area with a fixed settee converting to a double bed, movable easy chair converting to a single bed, solid fuel stove, book case, colour TV, DAB radio and DVD player, cupboards. There is a table which folds flat, and two wooden folding chairs which allow 5 to sit at the table for meals etc.

Front cockpit with seating space, storage and cratch cover. The gas bottles are stored in a hold in front of the cratch area.

Freedom was built in the late 1980s and has been well cared for by members of the society. Consideration was given to buying a newer boat around 2010 but the strong consensus was that we would be hard pressed to find a boat that offered the same balance of attractiveness, comfort and value. A new engine was fitted prior to the 2008 season and the outside of the boat was repainted in May 2010. The kitchen was replaced during the winter of 2012. 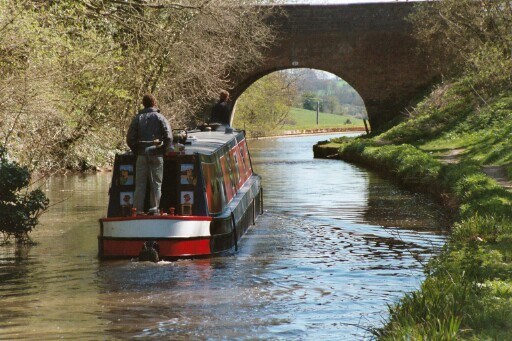 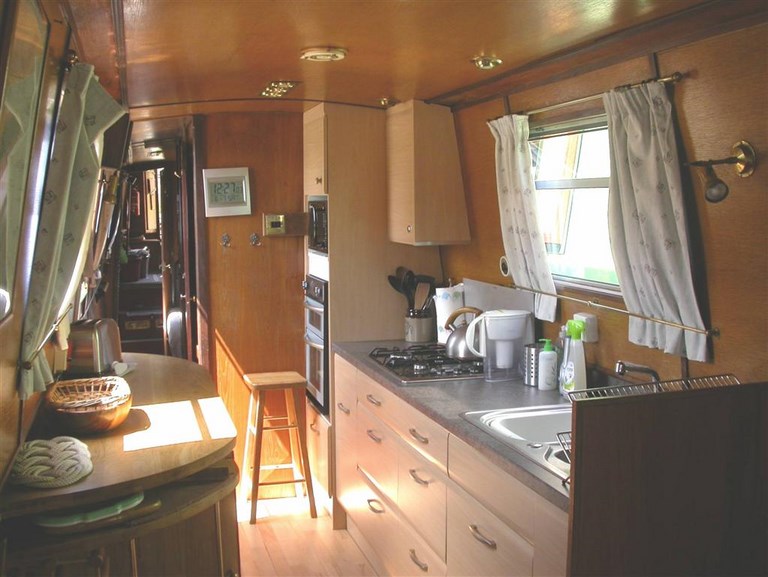 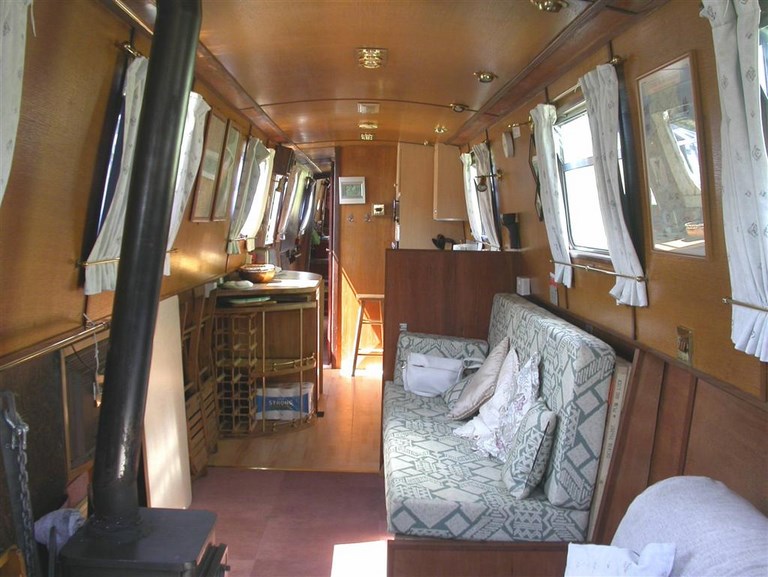 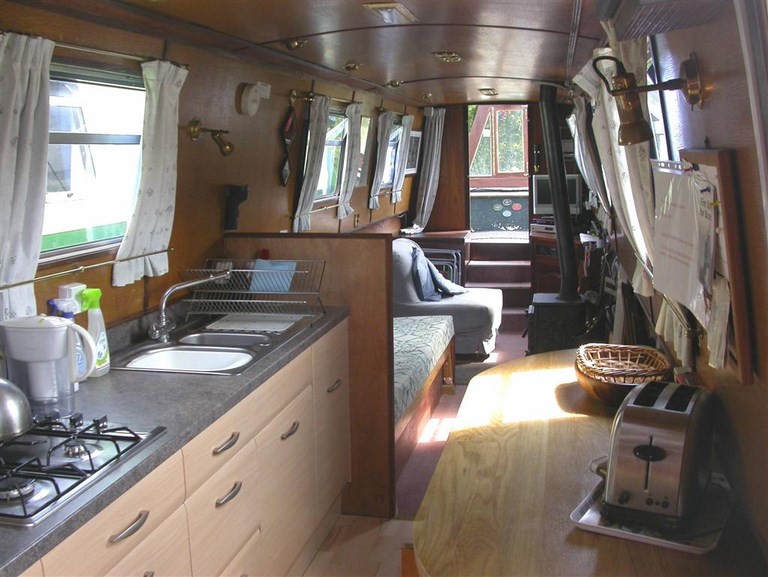 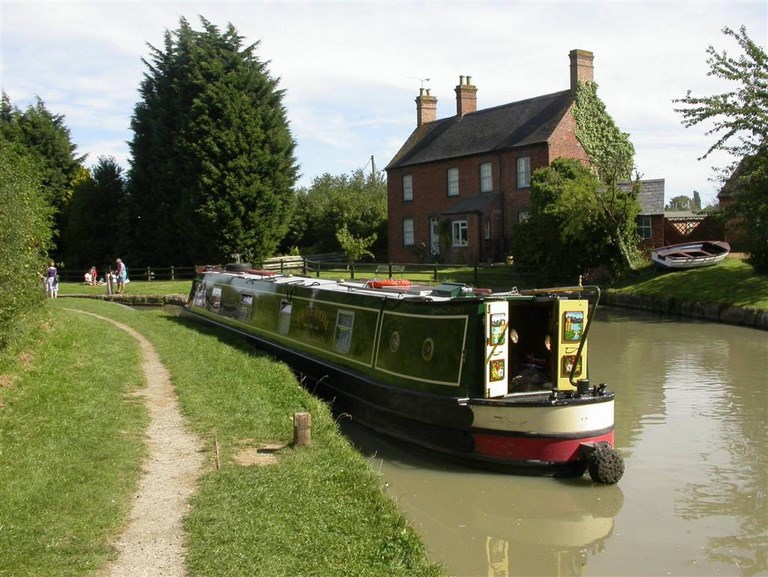 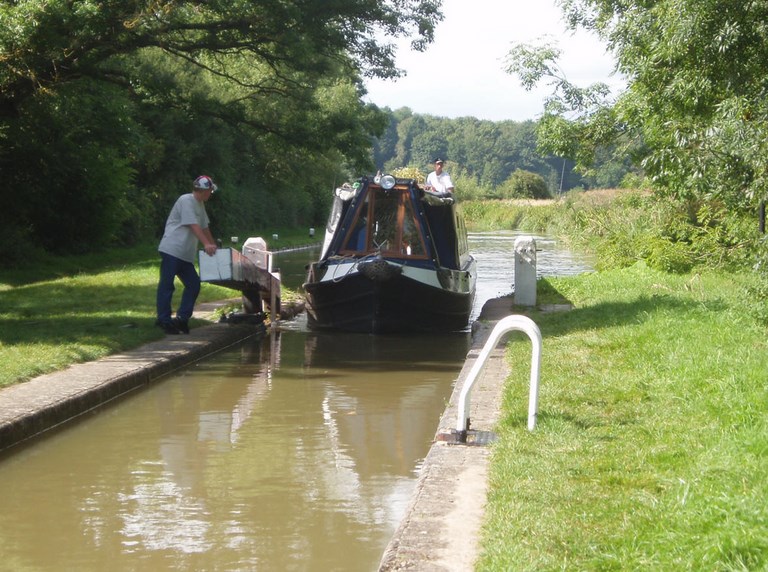 The £60 per month, paid monthly, is to to cover moorings, licence, insurance, repairs, gas and solid fuel. There is no additional charge for extra weeks. Monthly charges will be paid up to the time of share sale.  Members also pay for the cost of diesel and pump-out for each week that they use the boat.
-----------------------------
Freedom is owned by members of the Canal Cruising Society, formed over 20 years ago by a group of canal enthusiasts with the aim of buying a boat and running it on a non-profit basis to provide holidays at reasonable cost. We have an agreement (which was drawn up by a solicitor, to protect both the group and the individual member) which we all sign and abide by. A copy is available on request. Per this agreement shares are purchased from the Canal Cruising Society who then pass proceeds of the sale to me once funds have cleared. Fees are due on the 1st of each month and new sharers are required to pay from the first full month of ownership.

Freedom was built in the late 1980s by Heywood Boatbuilders and has been well cared for by members of the society. Consideration was given to buying a newer boat around 2010 but the strong consensus was that we would be hard pressed to find a boat that offered the same balance of attractiveness, comfort and value. A new engine was fitted prior to the 2008 season and the outside of the boat was repainted in May 2010. The kitchen was replaced during the winter of 2012. The bathroom ws replaced with a wet room in 2017 and a Honda EU10i generator purchased by the group.

As there are no "out and back to base" rules, the next crew takes over from wherever you end your holiday. This way you get to experience a wide range of canals and waterways. Members tend to help each with transport at the various hand-over locations. The boat is left clean, fuel and water tanks are filled and the toilet pumped out, ready for the hand-over to the next members.

The only restrictions on where you cruise are the size of the boat (slightly too long for the locks on a few waterways) and our insurance policy which restricts tidal cruising unless for access.

The day to day affairs of the group are managed by an elected committee and we hold one general meeting each year to elect the Committee, discuss any matters concerning the boat, agree the maintenance actions for the winter, and formulate the holiday rota. The members of the Canal Cruising Society come from all over the country.

The home mooring - Hawne Basin - is located at the end of Dudley No2 Canal. It is owned by the Coombeswood Canal Trust and there are a select number of live aboards including one former sharholder. All usual facilites are available - diesel, pumpout, bath / shower facilites and a clubhouse.

The AGM is held here generally on the first Sunday in November.

We have a web site that can be found HERE